i.e -- fits the Long-EZ (LE), Cozy III, Cosy, Cosy Classic, Cozy MK-IV and AeroCanard ; but will NOT fit the E-Racer, Berkut nor Velocity because their center section spar is not a LE box style, and the E-Racer spar must also be lengthened at least 18" ; does not fit the Vari-EZE ( wrong kind of center section spar, and it's too short ) or Defiant ( the planes GW is too heavy ) at all -- sorry.

This is Bill Theeringer's award winning stock 0-235 powered Long-EZ-RG that had been flying for almost 3 years before it was retrofitted with our Infinity 1 Oleo Strut Main Retract Gear. Bill's plane has been flying as a full RG aircraft since Jan. 1994. His cruise speed increased 19 to 23 mph, depending on his altitude and weight. Here's a picture of JD showing the Main Retracts to Burt & Mike, March 31st, 1994.

A few other aircraft landing gear projects completed and flying, in work and planned ( 14 have flown already, about 100 sets are being installed ):

We designed the original, 3400 lb. Maverick Twin Air prop aircraft Retractable Oleo Main Landing Gear. To see two *.jpg pictures, click for a close-up , and click for a 3/4's view! Their prototype set was on display in their booth at Oshkosh '98, then flew soon thereafter ;

We are designing the Retractable Oleo Strut Landing Gear for the 6300 lb., 700 HP turboprop powered, Golden Arrow for Abaris Aircraft ;

We should be starting a Retractable Oleo Strut Landing Gear design, then production, for a 12,500 lb. GW sub-orbital aircraft ;

We are the designer and manufacturer of Retractable Oleo Strut Landing Gear for 2 major aerospace companies for aircraft under 12,500 lbs. Gross Weight ;

Many more designs are forthcoming.  Contact us ANY afternoon PT if you need Retractable Landing Gear designed (using the latest Solid Works 3D Solid Modeling CAD and COSMOS Works FEA) and / or manufactured (using the latest CNC mils and lathes, and CAM Software) for your design.

What you will get with your Infinity 1 Retractable Oleo Strut Main Landing Gear Set for your canard for only $5995.00 (price, specs, data, and parts list subject to change without notice) -- see inset photo and list below: 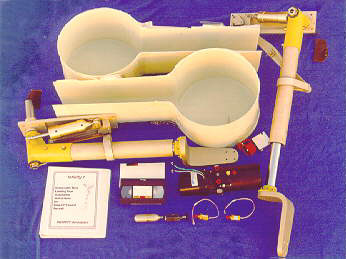 Additional Answers to Questions Specific to the Cozy MK-IV and the AeroCanard (and to the above) in random order:

When I receive your deposit, and your properly Notarized Purchase and Hold Harmless Agreements, I will send you the following items so you can get started ( items subject to change without notice ) :

*** Orders for the Retractable Main Landing Gear Set must have a properly completed Purchase and Hold Harmless Agreement returned to  INFINITY Aerospace  prior to Retractable Main Landing Gear Set shipment. ***
PLEASE NOTE -- many (most?) of you already know this, but we just learned (Nov. 2009) what the extra credit card "fees" credit card (CC) companies are charging us vendors! IF your Visa or MasterCard is a company / corporate CC, a foreign CC, a Rewards CC, and / or your Billing Address for your CC is wrong, and / or your Billing Address is a Post Office Box (POB), they charge us vendors an extra 4% !!! Therefore, if you are using one of these type of CC's, and / or your Billing Address is wrong, and / or it's a POB, there will be an extra small charge.